Back in the days of Tudor England, there was no finer Christmas feast than a whole hog’s head braised in wine. I decided to treat you all to something even better: a whole boar-like playable race for D&D 5e. I present to you the hoglin:

Appearance. The hoglin are broad creatures covered almost entirely with bristly hair. Their coat color can range from jet black, to golden blond, and chestnut brown. Some hoglin also have striped or spotted patterns.

Their visage is dominated by a long snout. Several inch long tusks protrude from a hoglin’s mouth. Although their eyes are completely black, they are often regarded as deep and soulful. Despite their feral and animalistic appearance, there is a suggestion of a rich inner life in their gaze.

Age. Hoglin mature very quickly and are considered socially and developmentally adults by the age of 3. On average, they live about 50 years.

Size. Hoglin stand between 5 and 6 feet tall and typically weigh more than 200 pounds. Your size is Medium.

Speed. Your base walking speed is 25 feet.

Keen Nose. You have advantage on Wisdom (Perception) checks that rely on smell.

Relentless (Recharges after a Short or Long Rest). If you take 7 damage or less that would reduce you to 0 hit points, you are reduced to 1 hit point instead. This damage threshold increases to 10 when you reach 5th level and14 at 10th level.

Clever Forager. You have proficiency with the Survival skill.

Thick Hide. Any critical hit against you becomes a normal hit.

Languages. You can speak, read, and write Common and Igpay. Igpay is syllabically dense, replete with consonant clusters. The language incorporates many modified loan words from other languages (especially common), so nonspeakers will occasionally pick up on a cognate or two.

Hoglin settlements are referred to as sounders and typically house around 100 villagers led by a distinguished matriarch. These enclaves are female dominated and typically the only males present are very young and still under the care of their mothers. It’s rare, but not unheard of for adult males to remain in sounders or resettle there later on.

Life in the wild.

Once a male hoglin reaches maturity, he departs the sounder to form a band with other itinerant hoglin. These small bands act as hunter gatherers that only return to sounders to trade, mate, or seek medical treatment if the need is dire enough. Because of this, the adventuring life is well-suited to hoglin sensibilities. While other cultures may look down upon a nomadic lifestyle seeking treasure and renown, there is no such stigma among the hoglin.

Alternatively, hoglin who chafe under the strict gender norms and expectations will often leave sounders and seek out homes among larger human cities. In rare cases, groups of dissatisfied and disillusioned hoglin will form small, independant enclaves. Theses enclaves, known as vills, tend to be experiments government and societal structure. Owing to their revolutionary nature, few survive beyond a handful of generations.

A venerated matriarch known as a grand old boar acts as the highest authority in the sounder. The backbone of her governing power is an organized militia assembled from the most skilled warriors in the community. In addition to rules enforcement and basic public safety duties, the militia also acts as a fighting force against external threats. Should the threat constitute a severe danger to the sounder (a large raiding party or overactive dragon for example), a grand old boar can put out a call to the diasporic hoglin with ties to the sounder to bolster their ranks. However, such reinforcements are unreliable due to their broad geographical distribution.

Culture in the sounder is deeply hierarchical and ancestor worship is common. The hoglin do not revere a particular deity. Instead their religion is animistic with each sounder crafting small pantheons of deceased saint-like heroes to supplement their reverence for nature spirits. Although each sounder’s roster of exemplars is unique, they often share many similarities; most often being selfless warriors that won countless battles for their sounder.

Once a sounder reaches a critical population density, a portion of its citizens will break away to form a new settlement nearby. This process does not typically cause animosity between the two groups, as it’s understood this is a crucial milestone in the progress of hoglin civilization. In fact, grand old boars will often brag about how many sounders they have “calved” from their domain. 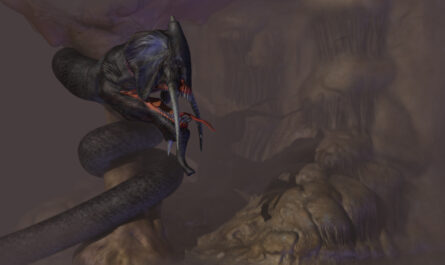 Bring Your Gently Used Diamonds to the Grootslang

One thought on “Playable Race: The Hoglin”