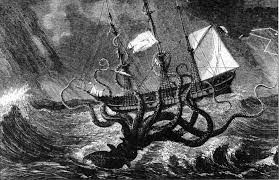 The boat rocks rhythmically as waves lap against the bow. The sea is calm, skies clear, wind in your favor. Because the waters are so still, you’re able to hear the sounds of splashing from all sides. You lean over the gunwale and see fish, maybe hundreds of them, flopping over each other at the surface. You regret not having nets ready.

Regret and curiosity quickly melt into fear as massive tentacles emerge from the water, taller than the mast, and start wrapping around the boat.

The kraken as we know it comes from Scandinavian historians and naturalists. There’s some association between the kraken and the Greeks thanks to Clash of the Titans, but that’s a purely Hollywood addition as the kraken doesn’t show up anywhere in Greek mythology. Kraken is an old Norwegian word for octopus, and the current German word for octopus. Swedish botanist and zoologist Carl Linneaus included the Kraken in his 1735 book Systema Naturae. In his book The First Attempt at a Natural History of Norway, published in the 1750s, Danish historian Erik Pontoppidan describes a creature that is “round, flat, and full of arms or branches,” and “the largest and most surprising of all the animal creation.”

Fishermen told stories of the kraken dragging ships down into the depths, both with their arms and by creating a giant whirlpool in their wake, and talked about “fishing on kraken” to describe a bountiful haul as fish would flee to the surface en masse to escape the giant creature.

All these stories are almost certainly describing giant squids. These massive cephalopods have been found all around the planet, and definitely still inhabit the waters around Norway and Greenland. Dead giant squids have been washing up on Norwegian shores for a long time, and giant squid egg sacks have been found in the Norwegian sea. So… yeah, the kraken is totally a giant squid. That may be anticlimactic, but it’s good news for you as giant squids aren’t actually likely to attack anything but the fish they’re trying to eat, and even in the tall tales told by sailors, the worst they’ll do is drag your ship down. As long as you can swim, you have a good chance of making it out alive.

Head further back into history, though, and the sea monsters get a lot weirder.

To touch on an actual Greek creature, there is the aspidochelone–the whale (or turtle) island. This enormous creature looks like, well, an island, complete with beaches and trees and plants on its back. Unwitting sailors would make camp, only for the entire “island” to submerge as soon as they lit a fire.

If you see an uncharted island out in the middle of nowhere, best just keep sailing. Or at least skip starting a fire.

For a Greek legend that’s a bit more reminiscent of the kraken, The Odyssey describes Charybdis and Scylla, a monster and whirlpool that sit on opposite sides of a narrow strait. Charybids was said to be a sea monster that lived under a rock, creating whirlpools that dragged ships into the depths. On the opposite side of the strait lived Scylla, a creature with six heads and twelve feet. She would wait for prey to pass by and drag fish (or men) into her cave.

“Between Scylla and Charybdis” is an ancient Greek idiom for choosing the lesser of two evils, so you might as well flip a coin and decide if you want to get eaten or get sucked under water. The whole point is that it sucks and neither option is great. Odysseus navigated these two by opting to steer closer to the monster and, uh, letting six of his men get eaten. If you’re stuck between a monster and a whirlpool and opt to face the monster, hopefully you have some dorks in your party you don’t mind losing. 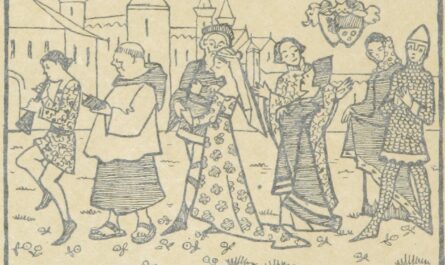 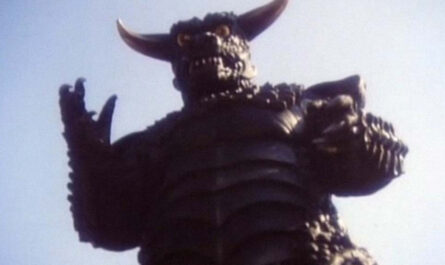 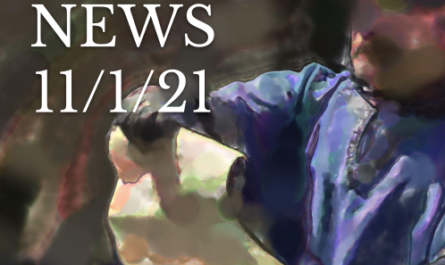